Bwindi Impenetrable National Park is one of the most interesting parks that tourists on their Uganda National parks tour can decide to visit. The park is located in the south western part of Uganda in Kisoro district, and the park is bordered by the Democratic Republic of Congo next to the Virunga National Park a park famous for different attractions like the Mountain Gorillas, the active volcano among the Virunga Mountains, Mount Nyamuragira, and Mount Nyiragongo and many more. The park is home to over 1000 animals, 200 butterfly and bird species which can attract tourists while on their Uganda National Parks Tour. 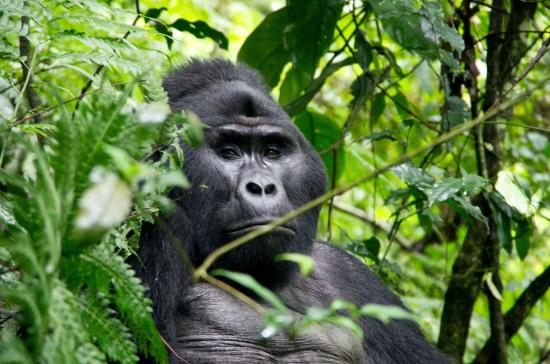 Bwindi impenetrable has a total number of 18 gorilla habituated groups and aside from the above others include; Muchunguzi, Katwe, Rushengura, Oruzogo, Busingye, Kahongye, Mishaya, Rwigi, Bweza, Bikyengi, Boshaho, Christmas and also other groups in the habituation process. Important to note about the gorilla families in Uganda is that the numbers can change based on different factors for instance birth which can lead to the increase in number and natural hazards like poaching that can lead to the decrease in the numbers.

Gorilla trekking is one of the most interesting activities in the park which can be carried out on a daily. For every gorilla family that is to be visited, a maximum of 8 people are allowed to visit it because of the gorilla habitat is fragile and when the numbers are many. It can alarm the gorillas as danger, therefore, a limit of 8 tourists per gorilla family is allowed. The activity gives tourists to spend an hour with the gorillas.

Tourists interested on going on the Batwa trail they will have a chance to meet with the group of people (Batwa) who will perform different cultural dances for the tourists will also visit their homesteads and they will have  a chance to see their architectural design where they use sticks and grass to construct a hut where they sleep in. Tourists will pay a fee of 80 USD to take part in the activity of engaging with the Batwa people.

Be ready to unlock nature’s beauty while on your Bwindi national park tour from visiting the mountain gorillas, visiting the Batwa people who are one of the most interesting indigenous groups of people tourists can also engage in other activities in the park which will quench their thirst for nature.